Digital Touch, a communication feature that was previously limited to watchOS, is now available on your iPhone. With Digital Touch, you can send friends and family drawings, heartbeats, fireballs, kisses, and more, all with just a few taps.

Sketches, taps, and other Digital Touch messages created on your iPhone are also viewable on the Apple Watch and vice versa. Here’s how to use the new feature.

You can send taps and drawings by using the smaller Digital Touch interface that replaces the keyboard, but there’s more screen real estate to work with when it’s expanded to the size of the full iPhone display.

The Digital Touch interface supports several tap-based gestures to send various taps and icons, plus it allows for drawing with a finger and annotating short videos with the included video tool. 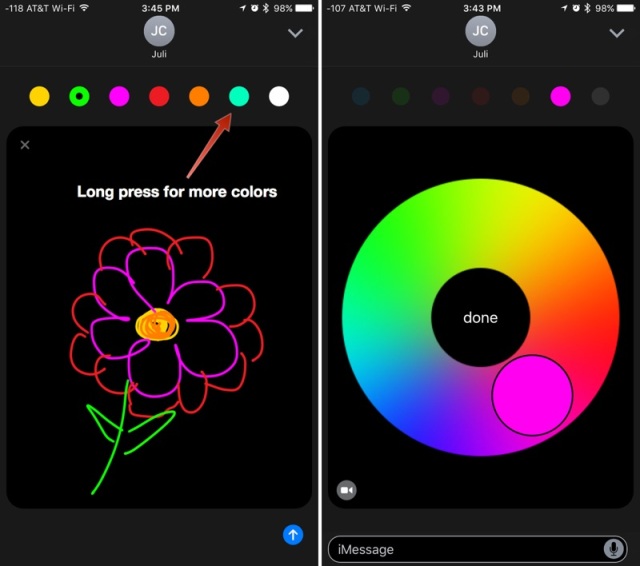 TIP: To access custom colors, long press on any of the color swatches. It’ll bring up a color wheel with custom color options for more personalized drawings.

TIP:  If your watch or the recipients watch is set on Airplane mode, the Internet connection is turned off. Mine seems to set to Airplane mode by itself sometimes. Swipe from the bottom up and turn off the button with the airplane symbol by tapping it.

The person who receives your Digital Touch drawing will see it drawn out in real time, just as you sketched it. If you make a flower, for example, it’ll play like a video, showing each petal drawn in succession.

When you receive a Digital Touch drawing in Messages, tap it and you can see it full screen.

TIP. Sending Digital Touch content can only be done on an iPhone running iOS 10 or an Apple Watch running watchOS 2 or 3, but it can be viewed on iOS devices running older versions of the operating system and on Macs in the Mac Messages app.

This entry was posted in Apple Watch. Bookmark the permalink.