I have loved using Shazam since it first came out. Shazam allowed you to hold your iPhone up to any music that was playing and almost every time it would tell you what was playing. iOS 8 has taken that technology, working with Shazam, and expanded it so that it does even more now.

As an aside, my favorite adventure with Shazam occurred when I was in a small painting group wherein everyone but me used a PC. Our teacher always played music in the background during class. One day someone casually said, “I wish I could remember the name of that music.” I picked up my iPhone, turned on the Shazam app, and instantly told them the name of the piece. It was just a tiny moment of smugness among a group of people who liked to slam all thing Apple because their husbands worked for a PC company.

That aside, in the new iOS 8, Siri does the work for you. Open Siri and ask what song is playing.  Siri tells you the name of the music, the album it comes from, and, if it is listed in the iTunes store, a buy button. 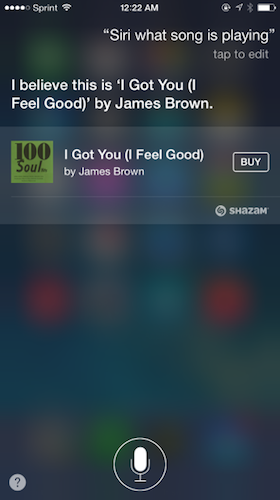 And remember that in iOS 8 you can open Siri even if you iPhone is asleep.

1 Response to iOS 8 Will Name That Tune Using Siri